within the framework of the project “Enabling students and citizens to realize their global environmental and social footprint” (CEE Bankwatch Network No 681/15).

An enhanced interest among students had prompted the video footage from the industrial pollution of Nigeria and Peru, which Mr Kondarev had made during his travels in those countries. His personal story as an eyewitness to the problems that extractive industries are causing in these countries excited the audience and provoked lively discussions. 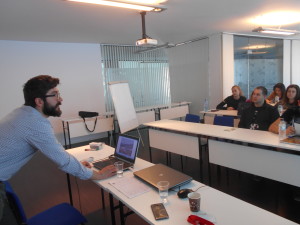 On February 8, 2017, a team from the Shtastlivetsa Association organised and held a public discussion on the topic: “Do we live on a planet? What connects Bulgaria, Namibia and Peru?” with the participation of students from the Department of Communication and Information at the University of Library Science and Information Technologies (ULSIT) and the Department of Geology at Sofia University St. Kliment Ohridski, with guest lecturer Gennady Kondarev, an economist from the Environmental Association Za Zemyata/For the Earth.

The moderator of the discussion, Dr. Petar Kanev PhD (from the Institute for the Study of Societies and Knowledge at the Bulgarian Academy of Sciences, ULSIT and SCA-Shtastlivetsa), introduced to the students the problems caused by the planetary network which had provoked the today’s industrial pollution because of the connectivity of the production process of the extractive industries in different countries and continents.

The participants in the seminar learned about Mr. Kondarev’s activities and investigations in the city of Tsoumeb in Namibia, Krumovgrad in Bulgaria and in the high-mountain areas of Peru. The photo-cadres with terrible pollution around these mines and the data tables for the extreme health issues caused by the exploitation of highly poisonous levels of arsenic in the gold mines in Namibia, in Bulgaria and in Peru had caused many questions to the lecturer and a heated debate among the audience. Gennadi Kondarev projected to the students the documentary “Good Life” by the Canadian-Hungarian director Megan Horvath, filmed in Krumovgrad and Namibia. The guest lecturer also told the story behind the film shot. Students shared their own personal impressions of the mines in Chelopech, Krumovgrad and Bobov Dol in Bulgaria. The subsequent heated discussion raised important questions about the future development of the extractive industries both locally and globally.

The event was carried out with the financial support of the European Union.