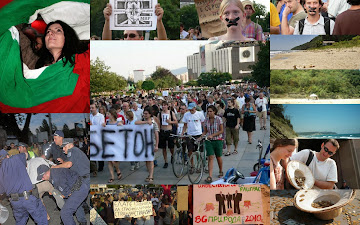 In order to understand the selection of the topic and its importance, a brief excursus into the risen and  development of the environmental movement in Bulgaria is necessary.

Therefore, I would like to present some of the most considerable stages in the evolution of the new environmental movement in Bulgaria.

Firstly I would label this movement as “new”, as in the end of 80ies of previous century Bulgaria already experienced the first so-called green wave, which was grounded in the dissident protests in the end of the totalitarian regime.

The first considerable civic mobilisation was been related to Irakli[1] – a quite picturesque and untouched place, one of the last nine places that has evaded the Black Sea saeside urbanization.

Save Irakli Campaign has been ofircially launched  in the spring of 2006 because of the investment plans of some companies /group of investors, associated with a offshore Swiss company founded in Bulgaria, to develop the area by building hotels, despite the place’s status – half of it is protected by law and is a potential NATURA 2000 site. The people from Save Irakli Campaign managed in due time to hold various activities and to attract enormous public support. Only within a year the citizen group evolved in national campaign, including people from many big towns in Bulgaria. Famous Bulgarian actors, film directors and intellectuals supprted the environmentalists. The groups’ activities are specific – they use non- conventional approaches, vision, layout and striking messages, as you can see on these photos.

Here you can see  two of the most successful actions:

-        The procession of the natural mad capes, held in February 2007. The message was that normal people, who are aware of the real dangers and issues, are been taken as MAD CAPES, and so they turn into endangered species, as they do demand that their rights shoud be protected and they should be treated in accordance to the law of species in danger

- The second event called The Longest kiss in the entire history of st. Valenitine’s Day,  and in the hole green movements history or A Kiss for Irakly, summoned in February 14th 2008   hundreds of enamoured activists in front of National Theater in Sofia.

The Campaigns’ activites are not organized solely on the base of holding effective  direct actions although they do attract a considerable public support. The campaign became visible at a national and european level due to active dialogue with the relevant institutions, strongly lobbying on executive and judicial authorities, organizing requests and petitions and filing court lawsuits.

On January 23, 2007, the environmentalists handed in at the National Assembly of Bulgaria  50 000 signatures petition of Bulgarian and foreign citizens standing out for defending Irakli and the whole Black Sea coastline. The same petition was been officially submitted  in in the European Parliament as a proof for the considerable public concern of the Bulgarians for the Black Sea coastline’s hyper building.

The second considerable civic campaign was named Save Strandja [2].

Strandja mountain is situated in the south eastern part of Bulgaria, has unique flora, fauna and landscape and is listed among the five EU first priority protected sites in South- Eastern Europe. Strandja has a statute of natural park. The campaign started quite spontaneously and evolved really fast. The reason for initiating it was the decision of the Supreme Administrative Court to abolish the , legal statute of the park. At the back of this absurd decision were the economic concerns of CRASH 2000 investment company and  pressure of the local authorities. CRASH 2000 erected this hotel and tries to legalize it.

“Save Strandja campaign” was the most rapidly evolving and most effective of all held so far. The explanation for this  success are related with the new technologies, permitting successive and permanent spreading out of the news – the ones who have been informed messaged sms and emails to their acquaintances, upload and post the info on all websites and blogs which engandred a spontaneous reactions. Few hours later all these people that has been in the current of the news of the court’s decision met and gathered at two of the focal places in the capital. Unofficially they have been between 1000 and 2000. Most part of them did not know each other and decided just in time how to act out without scenario. By stepping out on the roads and completely blocking the traffic /and virtually obstructing by sitting-in one of the major boulevards/. The police accused all of breaching the peace and arrested about 20 people some of them minor.

Nevertheless the result was quite clear. By this action /called flash mob/ the Campaign hit the news for the day. The events was broadly covered by all media in Bulgaria and many media in abroad. The public largely supported the protesters. This have been strongly backed up by the sociological agencies and their polls– According to NCAPO (National Center for Analysis of the Public Opinion) in July 2007 77 percent of the Bulgarian citizens did support the Campaign, exceeding the support of teachers,  pensionners  and taxi drivers, held almost at the same time. Consequently, only two weeks later due to the strong public pressure the Parliament invalidated its Act, thus restoring the previous statute of the Park.

The reason of its emergence was been provoked again by some senior decision – this time of the Council of Ministers– to reduce the Bulgarian protected areas in NATURA 2000 Network from 34  to 18 per cent.

In the part that has been dropped out there are places that every Bulgarian cherishes and loves to visit and relax by – these are one of the most picturesque, lovely and stunning places at the Black sea coast and up in the mountains. The official reason was that the scope’s borders had to be explicitly defined, and the non- official – grey sphere economic concerns together with political authority’s representation.

The campaign has been run without break for 8 months by peaceful sit in protests each Thursday/the day for the ordinary Council of Ministers’ session/ in front of the building of the headquarters of the Council of Ministers. Environmentalists continually diversify repertories of their sit-ins – each event was been held thematically and follows its own scenario such as – gathering coins for paying the future fines imposed by EU,  “Cotton ear – caps” protest – showing the lack of dialogue between the protesters and the state institutions, masquerade event, at which there’s a transgression of sexes’ roles – men are women and vice versa – to demonstrate that noting goes normal in the country, but things are inverted and insane.

The output was successful: the Council of Ministers decided to recuperate a considerable part of the  territories. Notice that this is due not only because of all protests, but because of a combination of tremendous exterior lobbying and permanent pressure from inside – by sending requests and petitions, elaborating expert stands and constant warnings to the European Commission and the European Parliament.

The last campaign that I will present / most current one/ is Save Rila Campaign.

Rila is maybe the most  known Bulgarian mountain range – a mythical place and mysterious centre of the esoteric White Brotherhood Movement, established in the end of the 19th century by the Bulgarian Peter Danov – The Teacher. The mountain nowadays still attracts not only fans of еxtreme sports but people with different spiritual needs, men with certain spiritual inclination. Rila Crew was initiated again on the same basis stated already – a decision for extension of existing ski racing tracks by violating and destroying some protected territories, hyper building and concreting the places all over. The construction and the building of an enormous ski resort is pending and  the construction as well  of artificial eighth lake near the  famous 7 Rila lakes, that will be tooled up with synthetic snow.

For quite a short time, this team consisted mainly of university students and young experts won great public support not only in Bulgaria but also from abroad. A clear evidence is the France- Rila Campaign, initiated by French citizen, who works on European level due to the  activity of a Bulgarian, Dutch, German, Macedonian , Belgium and French citizens.

The united endeavours of Rila crew and  Rila – France Campaign put the campaign in the agenda of the European Commission and the European Parliament. In the scope of the Campaign’s activities, there are few court lawsuits, petitions and written requests, meetings with representatives of the European Commission. Recently a group of euro-commissioners visited Rila on the ground of many complaints of Citizens for Saving Rila for violating many national and European laws. The considerable public support for the campaign is obvious by public petition for Saving Rila which collected 150 000 (hundred fifty thousand) signatures.

At the end of 2006, some of these citizen groups and campaigns merged into the most outstanding ecological and environmental NGOs and founded ForTheNature Coalition. This Coalition is actually the most sustainable and considerable accomplishment of Bulgarian civil environmental movement and can be regarded as an essential social and political factor. The structure is not homogeneous – citizen groups as Rila Crew, leagued together with civil associations even with NGOs around a particular problematic issue. The coalition does  not have a legal status and does make solutions based on the difficult democratic consensus principle. The organization is been managed on horizontal principle and  re-creates  network characteristic to the smaller civic groups and initiatives.

Last but not least I would like to point out that in the last years in Bulgaria there’s a considerable expansion of local initiatives and foundation of local lobby citizen groups and active initiative committees at places where there’s a need for deciding particular issues in given district, a metropolitan area or a community.

Just an example – There is a network of initiative committees within Sofia metropolitan, initiated and evolving because of waste disposal crisis of the city.

[1] initiated by a group of citizens, self-organized in defence of one of the last preserved sites along the Bulgarian Black Sea coast. The citizens from Save Irakli group have been actively involved in almost all actions in protection of Bulgarian nature in the past years, as their activities had been supported by the most important  nature conservation organizations in Bulgaria